In Arendt and America, Richard H. King examines the fascinating relationship between the political theory of Hannah Arendt and the country to which she, as a German Jew, immigrated in 1941. King argues that Arendt left important traces on the political culture of the USA, and that America, in turn, influenced Arendt profoundly. Among others, the author addresses Arendt’s stances on racial inequality in the US, the American Revolution, and her polarizing report Eichmann in Jerusalem and the subsequent controversy over it. In his densely written study, King presupposes his reader’s knowledge of the history and the contents of the American, but also the European, traditions of thought, as well as of Hannah Arendt’s political theory in general. 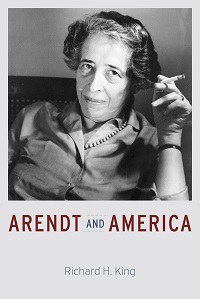 All articles (not book covers) in KULT_online from issue 50 on are published under the license Creative Commons Attribution 4.0. All published articles may be reused under the conditions of the license, particularly for commercial purposes and through editing the article (Human-Readable Summary). All authors (have) permitted the publication under the above mentioned license. There is no copyright transfer towards KULT_online. For all book covers specific rights might be reserved, please contact the respective publisher for any lawful reuse. All contributions published in issue 1-49 of KULT_online are free available online and protected by the German Copyright Law.