International Graduate Centre for the Study of Culture (Giessen)

The international conference “Europe’s Crises and Cultural Resources of Resilience (ECCRR)” took place from the 12th to the 15th of September 2018 in the historic Villa Sciarra in Rome, Italy, where the international guests were kindly hosted by the Istituto Italiano di Studi Germanici, an independent German Studies institute. The project was realized within the program Hochschuldialoge mit Südeuropa ab 2018 (Academic Dialogues with Southern Europe) and funded by the German Academic Exchange Service (DAAD) with financial means from the Auswärtiges Amt (German Federal Foreign Office). The conference involved participants from Germany, Italy, and Portugal and a number of institutions contributed to the productive discussion and the successful realization of the conference: the organizers from the European PhD Network “Literary and Cultural Studies” and the International Graduate Centre for the Study of Culture (GCSC) at Justus-Liebig University Giessen (JLU), the Università degli Studi di Bologna, the Università degli Studi di Bergamo, the CECC Research Centre for Communication and Culture at the Universidade Catolicá Portuguesa Lisbon (UCP), the FCT (Foundation for Science and Technology Portugal), the Casa di Goethe in Rome, the DAAD Alumni Italia and the Instituto Italiano di Studi Germanici in Rome.

With its timely topic, the conference engaged in an interdisciplinary and international dialogue on the recent political and financial crises of Europe, particularly of the European south. The wide-ranging contributions investigated the role that literature, art, and culture can play in mediating, negotiating, managing, and even solving such crises. 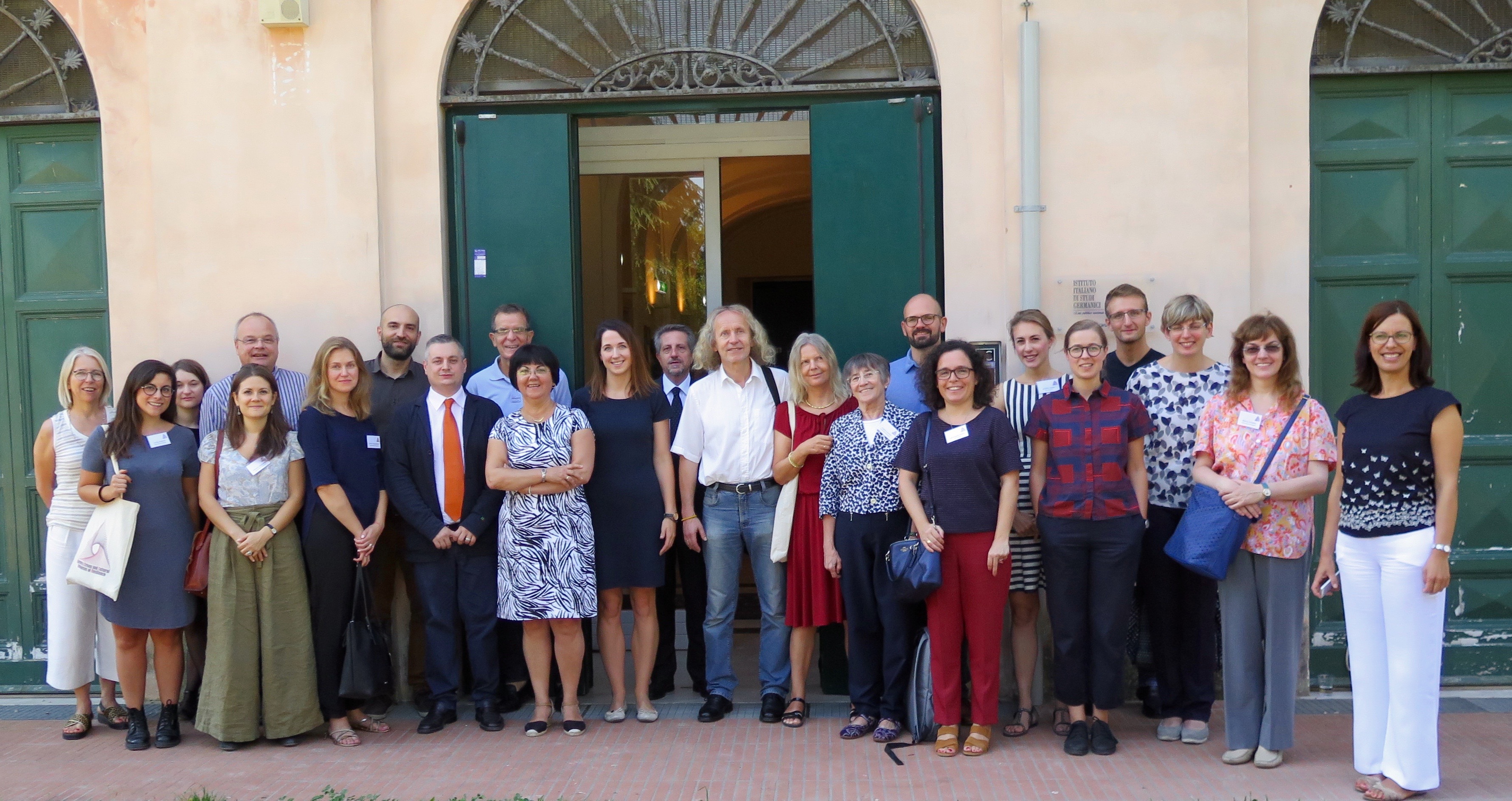 In how far can narratives and myths in and of Europe be considered creative resources of resilience and tools for resistance and regeneration in a moment where a growing Euro-scepticism and right-wing populism threaten the long path to European integration launched with the Treaty of Rome 60 years ago?

Tracing Resilience as a ‘Collateral Concept’

The first panel, Discussing Crises in/of Europe then laid the ground for a deep and wide-ranging engagement with the concept of resilience. First, VERA NÜNNING (Heidelberg) drew on psychology and cognitive narrative theory to discuss the role that narratives can play for the development of both individual and collective as well as societal resilience and the formation of shared values and ethics. ANA MARGARIDA ABRANTES (Lisbon) further underlined the role that fictional and non-fictional narratives can play both in the construction of collective experiences of crises and in addressing those challenges through an examination of street art and two novels dealing with the financial crisis in Portugal. Finally, DANIELE PASQUINUCCI (Siena) took a historical perspective and stressed the historical roots of contemporary anti-German narratives which are currently fuelling anti-European sentiments in Italy.

Closing the first conference day, MICHAEL BASSELER (Giessen) delivered the first keynote lecture of the event on the topic of “Cultures of Resilience and Culture as Resilience: Trajectories and Potentials of an Emerging Concept for the Study of Culture”. He traced the emergence of the “collateral concept” of resilience across various disciplines, gave an overview of existing research on culture as a resource of resilience, and finally provided some tentative suggestions for further exploring the role that resilience could play in the study of culture. His lecture thus provided the basis for fruitful and well-founded discussions throughout the following days.

The second conference day began with two workshops. POLINA SHVANYUKOVA (Bergamo) invited participants to explore letter-writing as a manifestation of personal resilience. Under the title of “Epistolary Manifestations of Resilience: A Practical Workshop on Letters of Requests for Help” she discussed continuities in the epistolary tradition of writing requests for help. Her focus was placed upon the role of resilience as manifested in this popular type of letter. MARÍLIA DOS SANTOS LOPES (Lisbon) gave a workshop on “Discovery and Self-Discovery in European History”, in which she argued that the discovery of foreign worlds has mainly led Europe to discovering itself. Participants in the workshop discussed several examples, especially from the 15th to the 17th century, that describe and depict cultural contact as well as reveal how the comparison between cultures may serve as a strategy of resilience.

Examining Resilience in Literature and Culture

After the workshop phase, early career researchers presented their projects dealing with manifold examples of how culture may function as a resilience-building resource. First HANNAH KLAUBERT (Giessen) discussed the critique of the resilience concept in the emerging field of the environmental humanities. JENNIFER KAPPE (Giessen) then explored literature as a resource of resilience in mental-health discourses through a close-reading of Matt Haig’s Reasons to Stay Alive (2015). OLIMPIA MALATESTA (Bologna) presented German ordo-liberalism as a key narrative of the European unification process and MATTEO SCOTTO’s talk (Villa Vigoni) asked whether a new kind of European patriotism could be the answer to the ongoing crises of the Union. VERA HEROLD (Lisbon) recounted the role that music played in the resilience-building activities of the Lissaboner Deutsche during the two World Wars through an exploration of her own family-history; CECILIA MOLESINI (Padova) examined Ostalgie (a German term describing nostalgia for the GDR) as an identity-forming and at times even resilient impulse during the unification process in Germany. Finally, VERENA LINDEMANN-LINO (Lisbon) provided insights into contemporary cultural negotiations of exile in Portugal during WWII.

The second day was rounded out with a public keynote lecture by ANSGAR NÜNNING (Giessen) entitled “Unzeitgemäße Betrachtungen zum Wert und Wissen der Literatur als Ressourcen der Resilienz: Europäische Kulturen als Erzähl- und Wertegemeinschaften”. His lecture was held at the Casa di Goethe in Rome’s city centre, where it was followed by a reception. In his talk, Professor Nünning explored the potential and value of (fictional) literature as an answer to multiple challenges of our time. In an age where the humanities, and specifically literary studies, are deemed irrelevant in the face of financial, ecological or ideological crises, Nünning argued that the world-making, empathy-building, attention-training, and community-building functions of literature provide a highly valuable resource for resilience on an individual, national, and European level.

The next morning added to the previous theoretical discussions with a more practical note. MARINA DOSSENA (Bergamo), IMKE POLLAND (JLU Giessen) and INÊS ESPADA VIEIRA (Lisbon) presented three pan-European initiatives that serve as successful models for cooperation across universities, institutions, and disciplines: The international MA programme “European and Pan-American Languages and Literatures”, the European PhD Network “Literary and Cultural Studies” and the European 4C’s project “From Conflict to Conviviality through Creativity and Culture”, based in Lisbon, which engages artists, scholars of cultural studies, and the general public into a dialogue. This was followed by a fruitful round-table discussion with all participants, further examining challenges and best practices for sustainable cooperations across disciplinary borders on all levels of academic careers.

In the afternoon, the panel European Entangled (Hi)Stories focussed on the historical dimension of European resilience. While ANDREA D’ONOFRIO (Naples) examined the role of historiography in pan-European memory cultures after WWII, GUGLIELMO GABBIADINI (Bergamo) traced historic continuities in metaphors of crises and resilience from Enlightenment emblems to contemporary self-help books. STEFANO ROSSO (Bergamo) discussed the popularity of the ‘Western’ genre in Europe, and especially Italy, and traced its development towards more political, at times proto-ecological, non-violent, anti-racist, and explicitly political narratives.

In the following panel on Literature and Imaginative Spaces of Europe, ANGELA LOCATELLI (Bergamo) discussed how literature can convey historical knowledge through a careful examination of forms of life and subject relations, exemplified in a close-reading of Julian Barnes’ 2011 short-story collection Pulse. 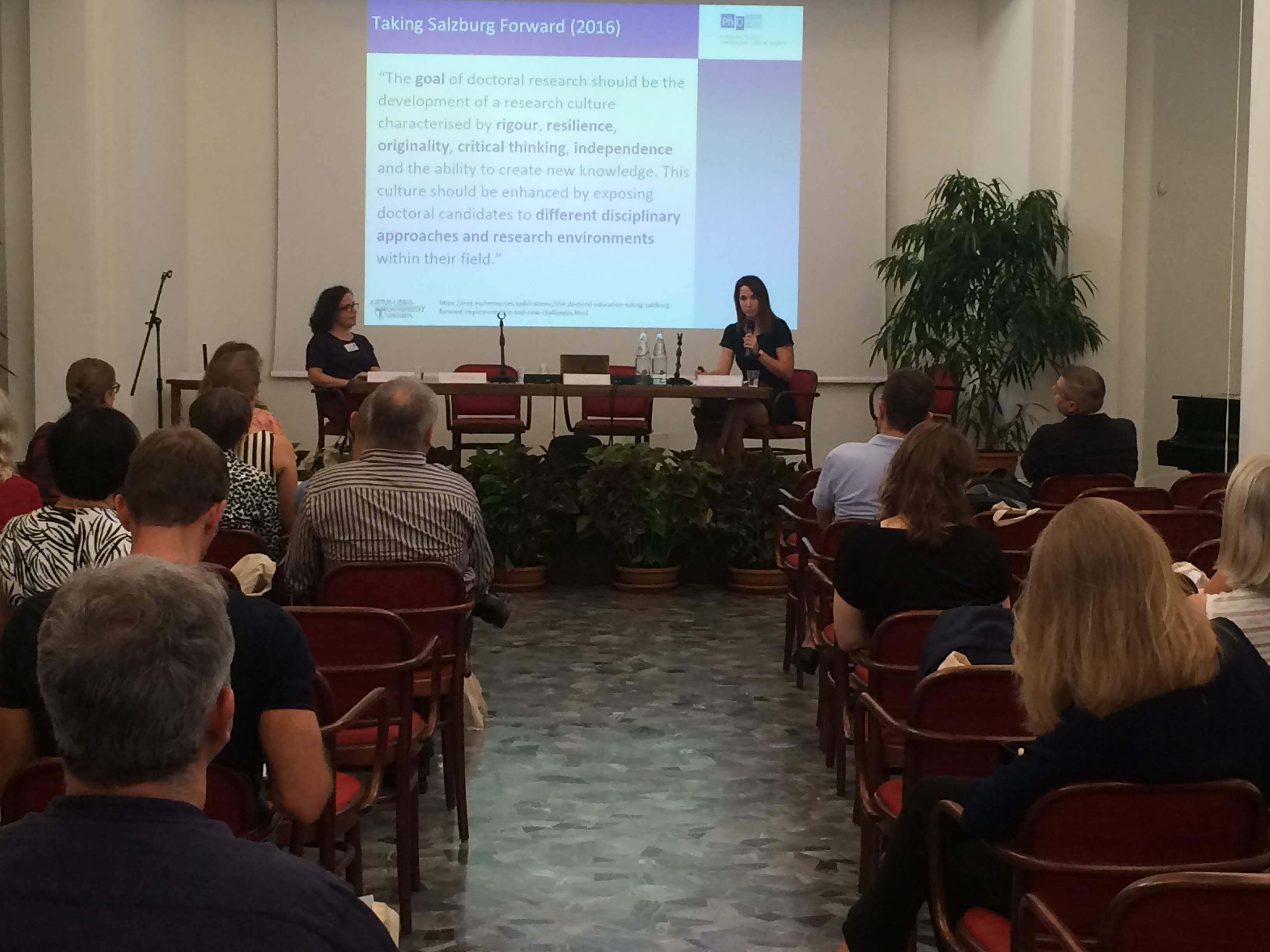 Following up on this argument, ELEONORA RAVIZZA (Bergamo) talked about ways in which literary representations of the ‘Windrush Generation’ in the UK work as stories of resilience and reconnection. Lastly, ALEXANDRA LOPES (Lisbon) considered memoir-writing as a resource of resilience and focussed on a reading of Salman Rushdie’s Joseph Anton.

The third day ended with a keynote lecture by PETER HANENBERG (Lisbon) entitled “Translation as a Cultural Ground for Europe”, which examined translation as an attitude and a method leading to resilience as well as a vital cultural ground for a unified Europe. He argued that the linguistic diversity of Europe might not only be regarded as an obstacle to unification but, on the contrary, that it strengthens Europe as a diverse and complex community.

Perspectives for Further Engagement with Resilience in the Study of Culture

The final day started off with the panel Creative Reactions to Europe’s Crises in which ANDREA DE PETRIS (Benevento) discussed the preconditions necessary for refugees arriving in Europe to tap into their own resources of resilience and to integrate into the receiving societies. RAUL CALZONI (Bergamo) read Robert Menasse’s 2017 novel Die Hauptstadt as the first truly ‘European novel’ through its critical examination of Brussels as the capital of the cultural and moral union of Europe. Finally, SANDRO M. MORALDO (Bologna) examined the current ‘panique identitaire’ of European nationalism through the lens of Stanley Cohen’s theory of Moral Panics. He asked how we can resist the generalizing tendencies of the ‘entrepreneurs identitaires’ and develop both individual and communal resilience in order to master the current crises.

The conference was then closed with a final discussion that summarized the results, drew conclusions, and outlined the next steps. It became clear that a deep interest in continuing engagement with the concept of resilience existed within the group. To this end, an edited volume will be published and a follow-up conference is planned. Participants stressed the joint commitment to further build on and strengthening cooperations amongst Germany and the southern European countries and sharing best-practice examples for developing new European projects and cooperations across disciplines and across generations of scholars. Promising paths towards a further examination of culture as a resilience-building resource in the face of (European) crises were developed. These include the concepts of conviviality and creativity, issues of agency in a moment of crisis, and approaching resilience and crises from a diachronic as well as from micro- and macro-perspectives.

Anette Walter (Cultural Attachée of the German Embassy in Rome)

Daniele Pasquinucci (Università degli Studi di Sienca, IISG, Italy): “Searching for Scapegoats or the Burden of History? A Historical Insight on Antigermanism and Antieuropeanism in Italy”

Keynote Lecture I Michael Basseler (JLU Giessen, Germany): “Cultures of Resilience and Culture as Resilience: Trajectories and Potentials of an Emerging Concept for the Study of Culture”

“Epistolary Manifestations of Resilience: A Practical Workshop on Letters of Requests for Help”

Vera Herold (UCP Lisbon, Portugal): “Schütz and Schumann in Dark Times. The Role(s) of Music for the Lissaboner Deutsche – From Exclusion to Inclusion”

Cecilia Molesini (Università degli Studi di Padova, Italy): “Being an Ossi in the United Germany: The Political and Cultural Heritage of the German Democratic Republic in the Early 1990s”

Presentation of Successful Models of Cooperation

“How to Improve, Extend and Organize Sustainable and Enduring Cooperations on the Pre-, Post-Doc und Peer Level?”

Guglielmo Gabbiadini (Università degli Studi di Bergamo, Italy): “Metaphors of Crisis and Resilience: Continuity and Change between the Enlightenment and the Present”

Literature and Imaginative Spaces of Europe

“Evaluation, Compilation of Results and Plans for Conceptual Volume”